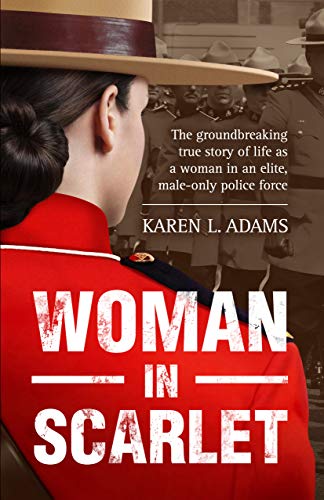 
An inspirational memoir of one woman’s 28-year journey from aspirations of becoming one of the first female officers within the fabled Royal Canadian Mounted Police, to overcoming the harsh realities of discrimination, injustice and personal violation.

Karen Adams’ dream became possible the day the RCMP finally included women in what was then, an unashamed boy’s club. When Karen joined the very first group of female RCMP recruits at age 22, she never anticipated the indelible mark this would leave on the landscape of Canada’s iconic police force and the women who came after her. Karen, least of all.

Fueled by equal measures of naiveté and a relentless pursuit of excellence to win the respect of her fellow officers, Karen found her passion in life despite a hostile work environment, both inside and outside the RCMP. Her story pulses with excitement as she recounts her initial forays into drug busts, surveillance and undercover missions–all the while suffering silently with PTSD after a physical assault perpetrated by a trusted member of the vaunted force she strived so hard to become part of.

Told with exuberance, humor and astonishing honesty, Woman In Scarlet, is a thrilling police car ride-along, as well as a deeply personal and courageous view of one woman’s evolution from a fledgling cadet to a respected trailblazer for social and political change.

Read Woman In Scarlet today for a remarkable journey filled with brutal obstacles, the heartbreaks of loss and the triumphs of achievement.