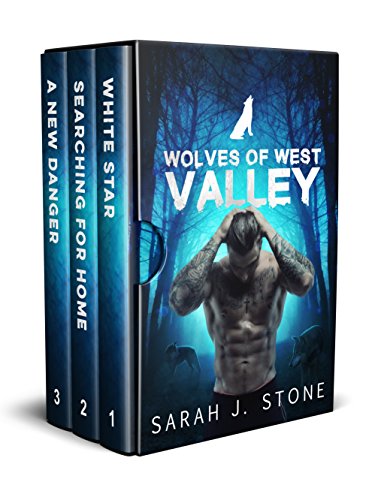 Book 1: White Star
Another boring gig in another small town. Willow’s job as a reviewer of resorts leads her to West Valley where s simple write-up leads to a world of mystery and betrayal.  The only person she can trust is Carter, a badass wolf shifter. It turns out that Willow plays a larger role in this community than anyone expected.  Can she trust her heart when she still hasn’t made up her mind about the world around her?

Book 2: Searching For Home
Sierra is working at a dead end job as a waitress, taking care of her ailing mother, and trying to quit smoking. Her life has been one selfless act after another, and it’s not until she sees a wolf turn into a man behind the Casino she works at that she realizes she needs to think of herself.   Discovering new things about herself, while getting to know the handsome beast of a man, Sierra has to decide if she is ready to leave her town behind or if the man with a haunted past, and her mother, are enough to pin her down to one spot.

Book 3: A New Danger
Willow never asked to become the Alpha of a wolf pack. For that matter, she never asked to be a wolf shifter or knew they existed. Yet, here she was, smack in the middle of both.   Head over heels in love with her one and only shifter mate, Carter, life couldn’t be happier. Or maybe it could, as someone continues to murder shifters in the small town of West Valley.   Her instinct is to run, but she can’t run away and have the man of her dreams, so she will stay for the fight of her life. Her only hope is that she can win.