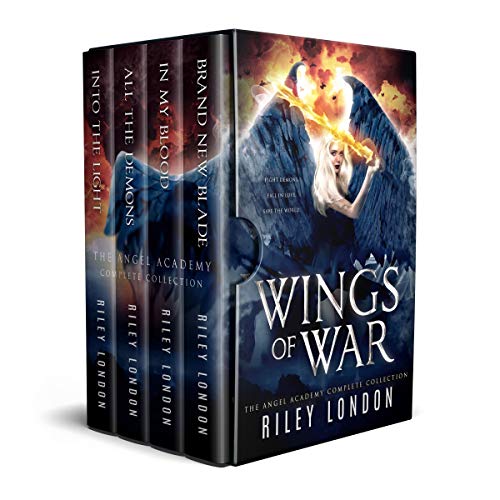 
Fight demons. Fall in love. Save the world.
Welcome to Angel Academy.

Wings of War is the full, four-book Angel Academy series wrapped up into a single, binge-worthy volume.

Need to escape into a world of take charge heroines, hot angels, and a battle that rages between Good and Evil – and for Celeste’s heart? Look no further.

My name is Celeste Venoix and I’m no angel.

I never had a family, so I’ve been taking care of myself ever since I was a kid. One night, some creep follows me home, and I use my fists to put him in his place. After the brawl, a handsome stranger approaches me, saying that I might be an angel.

Next thing I know, I’m enrolled at the Angel Academy. The academy teaches angels-in-training how to fight demons and become fluent in an ancient language or two. It’s hard enough trying to keep up with my classes, but somewhere between working on my swordsmanship and my Latin prepositions, I find myself falling for my best guy friend.

And falling for a handsome stranger.

And falling for a guy who totally hates my guts.

All at the same time.

Oh, and did I mention that demons keep trying to kill me and I have no idea why?

It’s going to be one blazing inferno of a year.

The Angel Academy series is a paranormal, university-age reverse harem series. Get ready for angelic warriors, terrifying demonic foes, and an action-packed story that ends with steamy, sweet, and totally heart-melting HEA for Celeste and her guys.