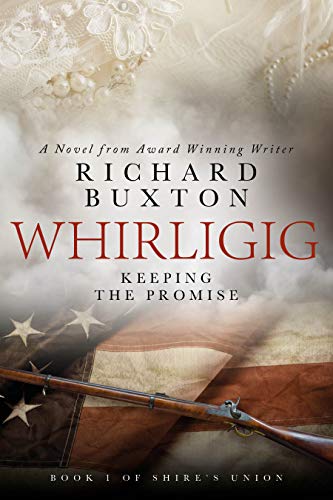 
"Whirligig is a magnificent novel, epic in scale!"– Gill Thompson, Author of 'The Child on Platform One.'

Shire leaves his home and his life in Victorian England for the sake of a childhood promise, a promise that pulls him into the bleeding heart of the American Civil War. Lost in the bloody battlefields of the West, he discovers a second home for his loyalty.

Clara believes she has escaped from a predictable future of obligation and privilege, but her new life in the Appalachian Hills of Tennessee is decaying around her. In the mansion of Comrie, long hidden secrets are being slowly exhumed by a war that creeps ever closer.

The first novel from multi-award winning short-story writer Richard Buxton, Whirligig is at once an outsider’s odyssey through the battle for Tennessee, a touching story of impossible love, and a portrait of America at war with itself. Self-interest and conflict, betrayal and passion, all fuse into a fateful climax.