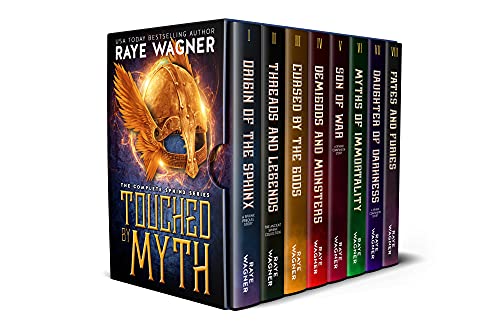 
Coming of age romance. Unique Greek Fantasy Adventure. A determined FMC who refuses to let the gods dictate her life.

From the famous statue in Egypt, to the tragic story in Greek mythology, the sphinx is found throughout history--even in the architecture of 16th century England. What if there was truth within each of these tragic stories? What if she really existed?

When Phoibe, a demigod daughter of Hera, refuses Apollo's advances, the god exacts a terrible revenge. Thus begins the monstrous curse meant to last an eternity--or until Apollo gets what he wants.

But as the curse is passed from mother to daughter, each refuse the golden god.

As Ancient Greece and the worship of the gods fade into history, the curse remains. Even as the demigods purge the land of monsters... Even when Hades strikes against the demigods, and mankind believes the gods are nothing more than myths. Even until our present day...

When Hope discovers safety for her will never exist--unless she fights to create it.

From hiding in a small town to sneaking through a demigod conservatory, searching for clues of her past, Hope finds love and allies in the most unlikely places. This young adult adventure continues when she and her friends descend into the depths of the Underworld and then all the way up to Mount Olympus where the gods reside.

As Hope searches for hidden knowledge, secret weapons, twisted truths, and enough power to square off against the Olympians, she's forced to face prejudice, ridicule, manipulations and abuse.

But Hope is determined to create her own fate . . . or die trying.

This boxed set includes the following:
Origin of the Sphinx
Threads and Legends: Egypt, Thebes, London, and Seattle
Cursed by the Gods
Demigods and Monsters
Myths of Immortality
Fates and Furies
Son of War
and
Daughter of Darkness.

With more than fifteen hundred pages of adventure, romance, tragedy, and triumph, fans of unique Greek fantasy will adore The Sphinx series!

Praise for The Sphinx series:

★★★★★ "This is AMAZING! I read it everywhere. It is the perfect mixture of young love, survival, and mythology." - DELUXE, Amazon reviewer

★★★★★ "I can't explain how much I loved this! I've been really wanting more Greek mythology ever since my obsession with the Percy Jackson series and this did not disappoint!" -Britt, Amazon Reviewer

★★★★★ "This series is a very entertaining approach to imagining the combination of the modern world with Ancient Greek mythology. Very fun read!"-- Amazon Review

★★★★★ "I really enjoyed these stories. It was hard to put down. The stories were exciting and so interesting. The myths were wonderfully explained."-- Amazon Review

★★★★★ "This book series was absolutely amazing! I couldn't stop reading until I was completely finished! The story had me completely hooked and I love how the author portrays the characters in the book! I love greek mythology and this book series quenched my mythological romance craving!" --Amazon Review