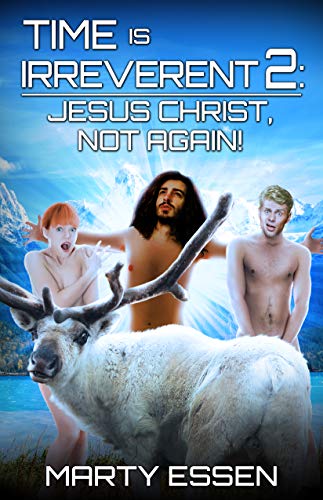 
• Marty Mann and Nellie Dixon are back for another irreverent, liberal, twisty, time-travel comedy! This time they have Jesus Christ, the actual guy, on their side.

The timeline correction Marty Mann and Nellie Dixon accomplished in their first episode was successful. . . . Or was it? When the two humans and their Krichard friends, Chrissie and Tina, return to year 2020 Earth to verify the change, they find an advanced, peaceful planet.

The four friends move into Marty’s new timeline home and the next morning head out for a flying car tour of Oodlelakeolis. The city, which was Minneapolis in the previous timeline, is beautiful from the air, but when they swoop down to land, the Colorless Ones, a cult of religious extremists from the planet Krichardia, reverse the timeline change and abduct Chrissie and Tina.

Instantly, President Handley is back to dropping nuclear bombs, and once again, Marty and Nellie must find a way to stop him.

After our heroes gain possession of the Krichards’ time-traveling Chromosphere Cruiser, they return to AD 31 with plans to restore the advanced timeline by wowing the locals with the Holy Smokin’ Hot Nellie act. Unfortunately, an unexpected event forces them to return to the year 2020, but they have a stowaway—Jesus Christ!

Can Marty Mann and Nellie Dixon save the world and rescue Tina and Chrissie with snark being their only superpower? Can a dark-skinned Jesus with a fondness for profanity and a disdain for evangelical Christians thrive in the twenty-first century? And who are the Soldiers of the White Jesus, and what will they have to do with any of this? These questions and more will be answered in this unforgettable episode.

Time Is Irreverent 2: Jesus Christ, Not Again! is a hilarious, thought-provoking satire with unpredictable twists, colorful and colorless aliens, the outrageous Holy Smokin’ Hot Nellie, and a juicy role for Jesus Christ, the actual guy!

Publisher's Warning: This book is intended for a liberal audience and features satirical content that may not be appropriate for Donald Trump supporters or those who are offended by views that challenge traditional religious beliefs. Common side effects include wide smiles, sudden laughter, and occasional snorts. Reader discretion is advised.

This is the second book in the Time Is Irreverent series. Each novel is a stand-alone adventure, and a humorous prologue quickly gets readers up-to-date.