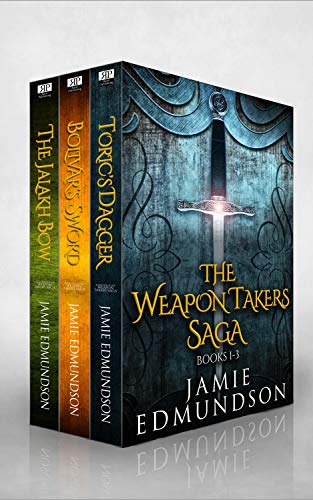 
Dive in to the fantasy saga where a motley group of heroes must recover a stolen relic.

Twins Belwynn and Soren can communicate telepathically. They must lead a team of mercenaries, priests and exiles on a mission that becomes far darker and more important than they had bargained for. Perfect for fans of multi-character epics like Lord of the Rings & A Game of Thrones.

Praise for this series from readers:

★★★★★ “If you’re a fan of great characters and plenty of action set in a well-developed fantasy world then this is your series.”

★★★★★ “With interesting, well-fleshed out characters and a genuinely enthralling plot, this one really stood out for me.”

★★★★★ “Usually the author's writing links out a little for the next book or two, but not this guy, it stays right up there. You really need to get the rest of this series, you deserve it.”

Comprising books 1-3 of The Weapon Takers Saga, this box set follows an epic quest for the seven weapons of Madria.

Belwynn, his twin sister, who shares a telepathic link with him

Moneva, a killer with a dark past

And a host of mercenaries, sorcerers, knights, dukes, kings and strange new races.

Who will lay claim to the weapons? Who can be trusted? And as war comes to Dalriya, who will take a stand against the dark forces that have been unleashed on the land?

Readers have compared this series to The Wheel of Time, Lord of the Rings, The Belgariad & A Game of Thrones.

“This quest to retrieve a stolen religious relic ticked so many of the boxes that got me into fantasy in the first place: an epic quest, a cast of diverse characters, swords and sorcery, otherworldly landscapes, strange creatures. Couple all this with a world which has a detailed history replete with political rifts, feuds and machinations, there is a lot going on. I especially liked the mix of characters, each bring their own skills and personalities to the party.”
CF Welburn, Author of The Ashen Levels