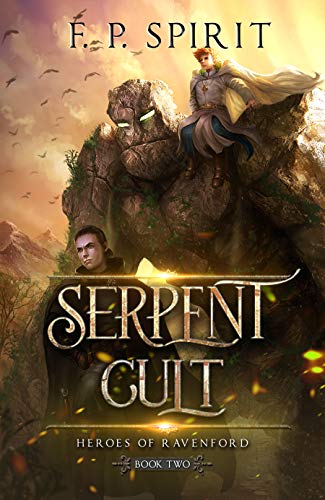 
An army of darkness has targeted Ravenford. Who would be crazy enough to stand in their way?

The mage had been part of a cult that practices the darkest of arts. For reasons shrouded in mystery, the group has set its sights on the little town Ravenford.

With new threats cropping up in and around the town, Glolindir and friends are faced with an impossible task: protect Ravenford from an army of monsters, assassins, and black magic.

From the depths of the sea to the spires of Ravenford keep, the young heroes follow a twisted trail of intrigue and death. Surrounded on all sides and vastly outnumbered, do they even stand a chance against such overwhelming odds?

Enter a world of magic and adventure in this fun tale of heroes in the making. Perfect for fans of Lord of the Rings, Harry Potter, and Dungeons & Dragons.

"If you liked the unexpected allies in The Fellowship of the Ring, you should like the Heroes of Ravenford." - Amazon Reviewer ★★★★★

"A five star fantasy by a writer who is a very good storyteller." - Goodreads Reviewer ★★★★★

"Book 2 of the series adds more fantastical characters, lots of danger, battles, and magic. The author's imagination gives us an epic series to enjoy. Anyone who enjoys adventure, magic, and battles between good and evil should get this one." - Author Diane Rapp ★★★★★