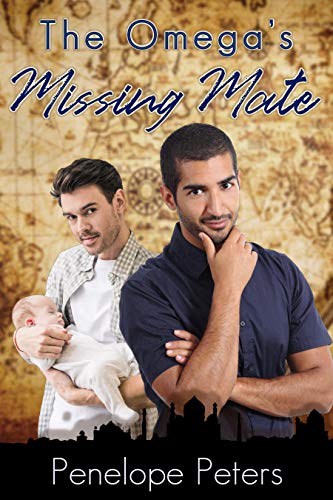 
Eric Calhoun was just looking for a date.

Eric Calhoun defies all omega stereotypes – most of the time. He’s adventurous, determined, independent… and desperate for a date that will actually go somewhere. When he meets Rashad Abboud, he immediately falls for Rashad’s dark good looks and sweet, considerate behavior. It’s obvious that Rashad likes Eric just as much – at least, if their short and probably ill-advised liaison in the back alley is any indication.

But fast forward one month – and Rashad’s not only ghosted Eric, but he’s left him a souvenir. Newly pregnant and determined to the right thing, Eric gives Rashad one more chance – only to discover that Rashad hasn’t just stopped returning his texts. He’s disappeared.

And after Eric asks the right questions in the wrong places – he’s about to disappear, too.

Rashad Abboud isn’t the macho, unattached alpha he might seem. And he definitely didn’t mean to ghost Eric. He only wanted to follow the latest lead on his missing mother, who fled the country after her husband’s death when Rashad was just a toddler. Rashad’s questions clearly have caught someone’s attention, though: one minute he’s walking down a D.C. street, and the next he’s waking up on the other side of the world.

Maybe for some people, finding his family would be a dream come true: but for Rashad, the combination of family politics and leaving Eric behind is a personal nightmare! And just when he’s convinced the only way out is to accept it – he finds the surprise of a lifetime waiting for him in the next bedroom over…

Neither of them were looking for an international adventure.

Eric never wanted an adventure quite this big – and Rashad never wanted to find family this cloying. There’s no reason in the world why they should trust each other – but it might just be the only way they’ll ever make it home.

The Omega’s Missing Mate is a stand-alone m/m mpreg romance with an HEA ending. It features over-the-top bedrooms, the slowest car chase ever, and family members who really need to learn the definition of “boundaries”.