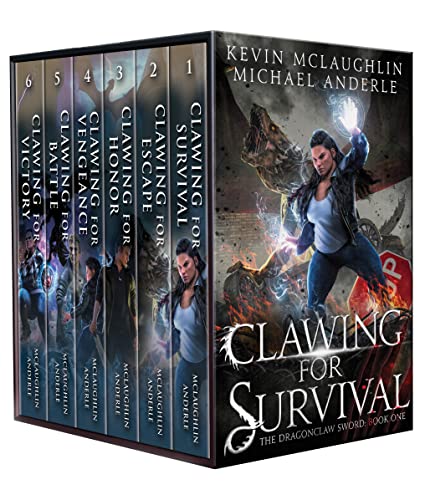 
What do a dragon and a dwarf have in common? Sometimes, all you need is one thing to bind you together. And when that one thing is fighting to survive...

Alone, Galen Stormwing and Vala don't stand a chance. Together, they might be able to save each other!

Get The DragonClaw Sword Complete Series to find out how far they're willing to go to survive and save themslves.

Cast out by dragonkind, threatened by his own family... A dragon with nothing left to lose can be a dangerous thing.

Unless, of course, that dragon is Galen Stormwing. He’s never been very dangerous. He was a failure at school, a failure at gaining powers, and a failure at keeping them.

Now his own parents have told him he needs to do something to impress them within three days, or they’ll have him executed as an embarrassment to the clan. He does the only sensible thing he can think of.

He runs for it. Survival trumps pride, as far as Galen is concerned. Most dragons won’t go to Canada, realm of the dwarf people, so that’s where he must go.

But he’s not the only one fighting for survival. Vala is a young dwarf in school to become an engineer when she begins exhibiting magical powers. There’s never been a dwarf mage before, and not all her people are thrilled about it. In fact, some of them would rather see Vala dead than allow their race to become polluted in that manner.

Both of them are vulnerable, lost, alone — and hunted. But together, they might just have what they need to save each other!

Included in this complete series omnibus:

Scroll UP and click Buy Now or Read for Free to begin the DragonClaw Sword adventure!