The Crocketts: Western Saga One 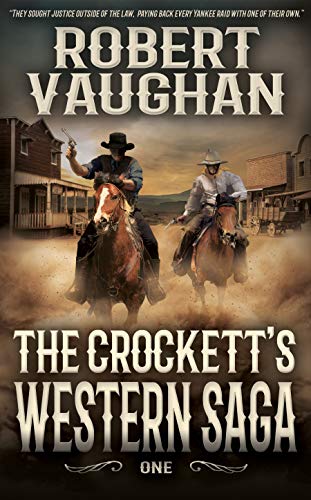 The Crocketts: Western Saga One


SADDLE UP FOR A NON-STOP RIDE IN VOLUME ONE OF A NEW WESTERN SAGA – FROM THE MAN WHO BROUGHT YOU THE CHANEY BROTHERS WESTERN SERIES.

During the Civil War, they sought justice outside of the law, paying back every Yankee raid with one of their own. No man could stop them… no woman could resist them… and no Yankee stood a chance when Will and Gid Crockett rode into town.

After their parents are murdered by a band of marauding Yankees, Will and Gid Crockett join William Quantrill and his gang of bloodthirsty raiders to seek revenge on the attackers.

Someone’s about to mess with the Crocketts, and that means someone’s about to be messed with back. Will and Gid don’t like getting shot at, especially by varmints who don’t have skill enough to kill them.

The Crocketts: Western Saga 1 includes: Trail of Vengeance, Slaughter in Texas, Law of the Rope and The Town That Wouldn't Die.