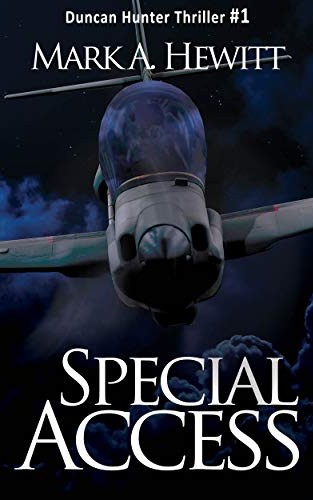 by Mark A. Hewitt


Approved by the CIA Publication Review Board.

“Duncan Hunter is a great character… an excellent read.” –A Good Thriller

Basking in the glory of killing Osama bin Laden, the President revealed that US Navy SEALs carried out the mission. His constant heralding of their heroism and capabilities damaged the SEAL's operational security, revealed tricks of their trade, and endangered them and their families. As some in the Special Operations community expected and feared, a number of SEALs are systematically killed across the country. The Navy's legendary SEAL commander, Captain Bill McGee, believes he is the next target of a sniper and seeks help from a close friend with unusual contacts and capabilities.

Duncan Hunter, a retired Marine Corps fighter pilot, flies a top-secret airplane with his mentor, Greg Lynche, the sometimes über-liberal retired CIA Chief of Air Branch. Together, in their quiet airplane, they execute some of the CIA's most sensitive airborne counterterrorism missions under a Special Access Program. Saving McGee from a sniper's bullet comes at a price as Duncan Hunter finds himself at the crossroads - either remain a contract pilot and betray a friend or become a patriot and risk exposure as a traitor. His decision pulls him into one intrigue after another, finally revealing the truth behind several conspiracies hidden behind the firewalls of top-secret security clearances, CIA files, and Special Access Programs.