Something Blue: A Sweet Romance Anthology 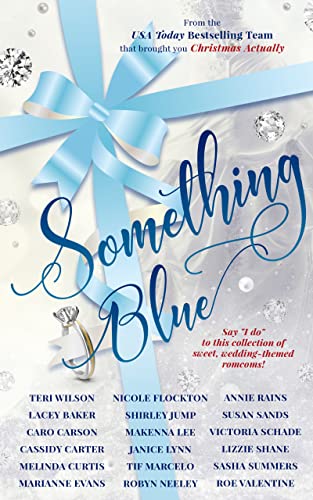 Something Blue: A Sweet Romance Anthology


Toss the bouquet and say "I do" to this collection of sweet wedding-themed romcoms from the team who brought you the USA Today Bestseller Christmas Actually! 18 all-new novellas by New York Times and USA Today bestselling authors.

Four Royal Weddings and an (Almost) Funeral
By Teri Wilson

Someone posh, someone new, someone annoying, something...true? A pair of royal correspondents from rival news outlets in London can't seem to stop bumping heads at a succession of royal weddings, but when they band together to find one of the queen’s puppies while the dog is running amok in Westminster Abbey, things get even more royally complicated.

Short-staffed and not in the mood for wedding day excitement, Emory Bellson is forced to DJ a reception or risk bad publicity from one of the most notable brides in Miami. When she's somehow roped into standing in the line of single women and ends up catching the bouquet, she thinks the day couldn't possibly get any worse. Except it does, the moment she notices the groomsman who catches the garter, Hayden Rivers, is also a guy she'd dated and ghosted three years ago.

His Custom-made Bridesmaid
By Caro Carson

Bethany Shepherd is on the verge of opening her own bridal boutique, as soon as she finishes this final job as a seamstress for an over-the-top wedding with fifteen bridesmaids. At the last minute, Bethany is forced to fill in for a missing bridesmaid on top of the fifteen dress fittings she must complete as a seamstress. Worse, the groomsman she’s paired with is her old college flame, the wealthy and arrogant Jovian Taylor, who suddenly seems more than willing to stay by her side, for better or for worse.

Something Borrowed
By Cassidy Carter

When bridesmaid Catherine Katz tries on the bride's ring before her best friend's wedding, she doesn't count on Lennox Miller, her former fiancée, catching her in the act—or not being able to get the ring off. She doesn't want Len's help, but now she needs it. During their race together to try and free her before the ceremony begins, Catherine begins to see that her own old love story might potentially have a new ring to it.

Always You
By Melinda Curtis

Cassie Andrews and Jude Turner were inseparable in high school. But Cassie went away to college to become a doctor and Jude stayed in Beacon Bay to buy and run the family bait shop. Somewhere along the line they decided to go their separate ways. Now Cassie's back for a friend's wedding and sparks are rekindled. But is she home to stay?

Love By Accident
By Marianne Evans

Mix a rescue puppy and unguarded frittata, and wedding reception chaos is sure to ensue. While Emily Carpenter and Raylen Preston deal with frittata-ghedon, sparks fly. But can a magical second-chance wedding celebration lead these two wounded hearts to their own happy ending?

The Wedding Rivals
By Nicole Flockton

When high school rivals find themselves as maid of honor and best man at their best friends’ wedding, it’s game on as to who has the best pre-wedding events planned. Old rivalries are renewed along with the spark of romance that has always simmered below the surface.

Something Lost Something Found by Makenna Lee

A Wedding at the USO by Tif Marcelo

Her Purrfect Plus One by Robyn Neeley

A Wedding to Remember by Annie Rains

Then, And Now by Susan Sands

The Groom That Got Away by Sasha Summers

The Perfect Fit by Roe Valentine