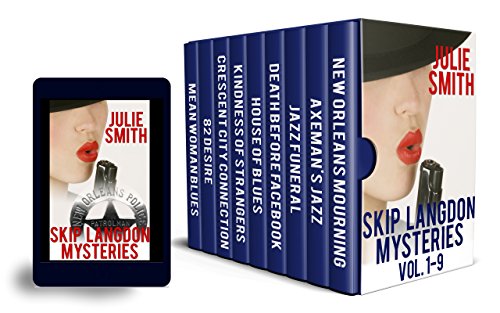 
The EDGAR AWARD-WINNING murder mystery series is now available for a KILLER price!

Grab 9 thrilling page-turners for less than an Alexander Hamilton!
Follow the remarkably bold, smart, and refreshingly human New Orleans detective Skip Langdon through the twists and turns of New Orleans--from raucous Mardi Gras to the swampy summertime--at she navigates deadly family secrets, tracks down a serial killer, and delves deep into the mastermind of a psychopath unlike any you've ever encountered...

"Like a good Grisham: taut, fast, and thrilling. But with a lot more heart and soul.” -The Clarion-Ledger

It's Mardi Gras in New Orleans, and civic leader and socialite Chauncy St. Amant has been crowned Rex, King of Carnival. But his day of glory comes to an abrupt and bloody end when a parade-goer dressed as Dolly Parton guns him down.

What's the perfect killing field for a murderer? A place where he (or maybe she) can learn your secrets from your own mouth and then make friends over coffee. A supposedly "safe" place where anonymity is the norm. The horror who calls himself The Axeman has figured it out and claimed his territory—he's cherry-picking his victims in the 12-Step programs of New Orleans.

Skip Langdon just happens to be on hand when Ham Brocato, director if New Orleans Jazzfest, is discovered dead on the kitchen floor in the middle of his own party the evening before the Fest. To complicate the already murky case, the victim's sixteen-year-old blues musician sister has disappeared, and Skip suspects that if the young woman isn't the murderer, she's in mortal danger from the person who is.

It’s a chilly November in 1994, and thirty-one-year-old Geoff Kavanagh surreptitiously splits his time between science fiction novels and cyberspace in his parents’ dilapidated, overgrown, uptown New Orleans mansion. Until his mother finds him dead from a suspicious fall off a ladder. Maybe he should never have posted about seeing his father murdered …

Sugar Hebert arrives home from a ten-minute errand to find her husband shot to death and the rest of her family missing—including her daughter Reed, heir apparent to the Hebert restaurant dynasty, and Reed's eleven-month-old daughter.

THE KINDNESS OF STRANGERS

Politics makes the strangest bedfellows of all and in New Orleans, a psychopath’s running for mayor. Not just the usual harmless megalomaniac—a murderer and a monster.

Sure, New Orleans is known for corruption, but suddenly the good guys get a break—an honest police chief. And then someone guns him down. When a terrifying organization called The Jury takes out the cop-killer, Detective Skip Langdon’s on the case. And she suspects The Jury’s the brainchild of her old nemesis, self-described preacher Errol Jacomine

It seems Councilwoman Bebe Fortier has misplaced her equally prominent husband, United Oil VP Russell Fortier. Across town, part-time detective/poet Talba Wallis has a simple wish--to find out what Russell Fortier's disappearance has to do with her. NOPD Detective Skip Langdon soon senses something big starting to unfold, something a lot bigger than a missing husband. Something rooted in corruption, resulting in violence—and motivated by that old demon . . . desire.

The Rev. Errol Jacomine is crazy as a fox that just ate a loon and more dangerous than a cell full of serial killers. He's trying to off Detective Skip Langdon, the New Orleans cop who’s twice smashed his criminal endeavors, yet each time he’s managed to slip away. Now he’s mad. In both senses of the word. And he has the connections to have her killed—or worse, those she loves.