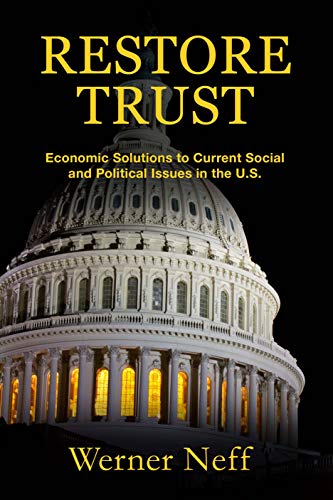 
Economic Solutions to Current Social and Political Issues in the U.S.

Poverty is a structural problem created by economic thinking errors and institutional poverty traps, revealed and discussed in detail in this book. Neff argues that America is a welfare state.

The working poor are a social problem created by politics. The low minimum wage does not support a most basic lifestyle and as a result, food stamps, free medical services and other social programs become necessary to cover the gap. Half of the Federal budget supports the poor and the elderly across the country. Americans, mostly the middle class, subsidize this insufficient minimum wage with their taxes and unknowingly and indirectly support the bottom line of companies that underpay their employees. Economic thinking errors are the source of our entitlement society.

Democratic principles are distorted. The current political system allows the wealthy and large corporations to covertly influence legislation and bend economic laws in their favor.

Too many Americans are blinded by dreams of success and vote against their real interests and values. This is the American voting paradox, institutionally supported by gerrymandering and voting restrictions that favor the libertarian ideology.

RESTORE TRUST is an invitation to take a fresh look at the current socio-economic reality. Neff discusses economic solutions to dysfunctional politics and offers a conclusive call to action to help Americans restore trust and defend their needs and core values. He offers opportunities to create a shift to strengthen our democracy.