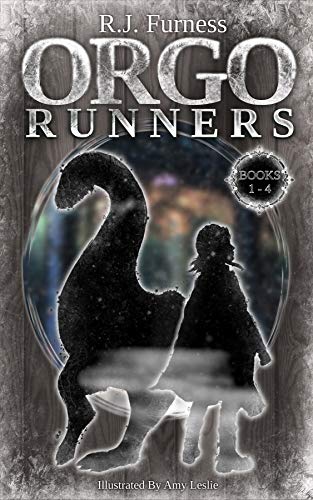 
Go on dangerous missions and battle vicious beasts with Fayth and her friends - in a future ice age.

Dive into this thrilling adventure series for children aged 7 and over.

Prepare to be gripped! Follow Fayth and her friends, along with their ORGO companions, on their first four dangerous missions. Plus, get an EXCLUSIVE sneak preview of Book 5!

The First Run (Book One)

14-year-old Fayth is a champion! Along with her friends, she races animals known as orgo in order to survive the aftermath of a new ice age. But, when Fayth’s friend is caught stealing, she has an awful choice to make…

Let her friend face a fate worse than death with his captors, or agree to make a dangerous journey delivering food supplies.

Join Fayth, Ink and Megg as they embark on their first deadly mission with their orgo companions.
Find out if their skill at riding orgo will help Fayth and her friends succeed!

Could you survive another mission?

As champion orgo racers, Fayth, Ink and Megg were chosen to transport food supplies. Yet they had no idea how much danger they faced. Join them on their second mission to Scorr Tanta. Along the way, they are ambushed by a mob of greedy gliders from Eklips territory.

Will they manage to overcome this latest crisis? Will the supplies reach the people of Scorr Tanta on time?

What if doing the right thing put your life in danger?

Fayth, Ink and Megg have a difficult choice to make when an enormous sea-creature gets stranded at the harbour! Megg wants to make sure that the seacrawler is safe, and she'll do everything she can to help it. But, when Fayth chooses to help Megg instead of going to work, she manages to get herself into a heap of trouble with the wardens.

Is Fayth pushing her luck too far this time? Is time running out for the 'Orgo Runners'? Will they be punished for refusing to take food to Scorr Tanta?

Legend Of The Orgo (Book Four)

Find the answers you've been looking for...

When Ink's orgo becomes ill, he asks Cedric to help her get better. But, during their visit to Cedric's barn, both Ink and Megg get more than they bargained for. Through Cedric's stories, Ink and Megg learn about how the orgo evolved, and it isn't what either of them expected! Join the Orgo Runners as they find out about Tobus, Calli and the Legend Of The Orgo.

Where did the orgo come from?

How did they evolve?

What is the reason for their extremely long necks?

Why did they get so fast?

Expect the unexpected in this 'Orgo Runners' story!

Be there when a group of angry whomphorn escape Eklips territory. What will happen next?