OinK! Only in Korea! 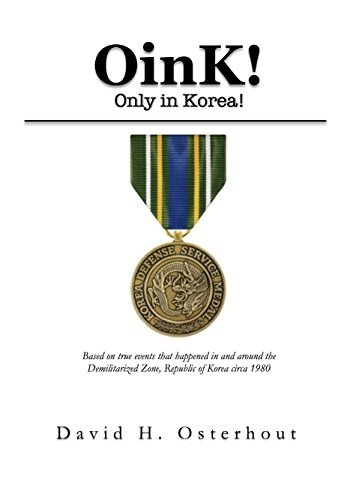 OinK! Only in Korea!


OinK! Only in Korea!

In 1980, years after Vietnam and even more years before Desert Storm, America was experiencing a seventeen-year period of peace. One of the few places a young army officer could find adventure was on the Demilitarized Zone (DMZ) in Korea, Freedom's Frontier. The second day in-country, the lieutenant was no longer a Korean cherry boy. Hours later he found himself inside the DMZ. By the end of the week, he was wounded.

As the intelligence officer for the battalion, he knew the area around the DMZ was a dangerous place. The minefields took many casualties, small arms fire got others, and artillery short rounds claimed even more, leading up to the bizarre episode of a missing severed hand and the search for the diamond ring that was no longer on it. Even something as simple as crossing the Imjin River after the monsoons turned deadly. And then there was the most feared affliction of all, catching river blindness. It's not a disease – it's going down to the river and getting your eyes shot out.

The lieutenant's daily routine was anything but routine. The averages told the story: a shooting incident every ten days with thirty-three combat related deaths during the year. The patrols were long and cold, the guard posts were desolate, and Freedom Bridge operations droned on until enemy frogmen shattered the monotony. Peace, in that part of the world, had a unique definition. As they say, the DMZ isn't hell but you can see it from there.
Those who worked hard also played hard. The parties were so wild that they fell into the category of “that which didn't kill you made you stronger”. The eleven and a half months in Korea provided more experiences than ever expected, especially the ending, when the lieutenant's twelve-month tour was cut short in a most unusual way by a booby trap.

This 'slice of life' novel is obviously military genre and is definitely memoir-ish. The story is steeped in facts because the author is the lieutenant intelligence officer who journeyed to the Korean DMZ – and paid the price with a severe and lasting physical wound and a psychological scar that, to this day, haunts him from time to time.

This is not going to be the next great American novel and it won't win any awards. However, it is an interesting story, like the ones told around the kitchen table or over drinks. When told, people become quiet, and listen. The reader will be completely entertained and amazed at what happened to one man in the Land of the Not Quite Right.

Go to any bookstore and you will see racks of books about Vietnam, World War II and Iraq/Afghanistan. Noticeably missing are books about Korea. This is an exceptional military tale not only because it takes place in Korea, but it is also about a peacetime military and the sacrifices soldiers make even when they are not at war. OinK! Only in Korea! is a must read for a veteran and there are millions of them who have served in Korea during the time of the truce.

This book brings to people a story that should be told and will allow “the lieutenant” to finally lay his peacetime “war” to rest.