My Life in Ladies' Knickers 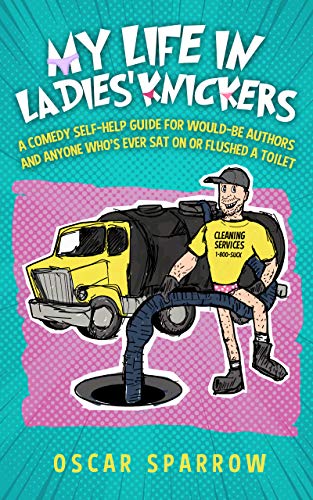 My Life in Ladies' Knickers


A touching comedy of passion, sucking and pumping.

A shocking story of news and fake news. A tale of heroism and struggle with a literary stalker. A success story - one small man's push to come off of the bottom.

Oscar Sparrow is a sewage trucker and poet. This is his true story.

Pursued by a literary stalker, crippled by lack of dietary fibre, sometimes naked and soaked in foul waste he never loses sight of his vision. Even from his police cell he sees only the blue sky. Driven on by his reckless love of women he becomes a best-selling female romantic novelist. If you've ever despaired, fallen in love, or sat on a toilet, this book will change your perception of reality.

Through failure, rejection and self-doubt a man fights his way off the bottom. A love story conceived over an open manhole and delivered by Elvis. An inspirational account of our common struggles. Take his grubby hand and for the rest of your life a comrade walks with you through every set-back and brings you through as a winner.

The self-help book the bosses don't want you to read.

'My Life in Ladies' Knickers' is as British as a Friday night kebab and a pub fight. Oscar Sparrow is a sewage trucker and poet. His life is a slap-stick romantic comedy where the slap is the harsh truth of life. The tickling stick has a shitty end with which to fight back. The romance is the transformational touch of a woman's love.

Enjoy laugh-out-loud moments as you discover the true story of how a sewage sucker became a successful female romance novelist. An outrageous comedy adventure and memoir.