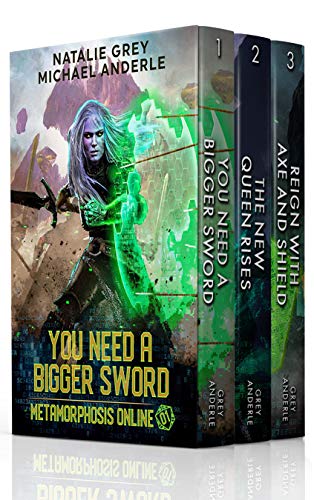 Enter the world of Metamorphosis Online,a fully immersive video game where players compete for spots in the Global Top 10—ranks that actually pay you to play the game.

You Need A Bigger Sword:

Broke, single, and working a crappy job as a blackjack dealer, Gracie's just blowing off steam and having fun.

Can playing a new type of immersive game help her overcome real-life issues, or will it cause more problems?

Before she knows it, Gracie has intervened in a generations-long war between the kobolds and the fae and started a ragtag guild, and her weird math abilities make themselves known in a way that most could not have imagined.

Can she deal with being pitted against the game developers?

For the first time Gracie can remember, she has something worth fighting for.

Will the creators of Metamorphosis Onlineand their infighting ruin the game for everyone?

Others want to learn what is allowing Gracie’s team to jump in the ranks, and are willing to go to great and scuzzy lengths to figure it out.

The group has decided to form a guild, but can they hold it together long enough to figure out a team tabard?

Can Gracie hold her team together while her personal life is going nowhere? Will she accept her mom’s invite to join the family for her sister’s engagement?

Metamorphosis Online is changing lives… Some for the better, some for the worse

The only thing Gracie believes is the power of her family…her digital family. She’s learning that the rest of life is just details.

Reign With Axe And Shield:

No one wanted Gracie to become the Queen - hell,Graciedidn’t want to be the Queen.

She is, though, and people are just lining up to take shots at her. Some want her gone, some want what she has…

…And one of them is determined to destroy the entire game if he can’t get what he wants.

Which means that Gracie might just have to team up with the absolute last people she wanted to: Dan and Dhruv.