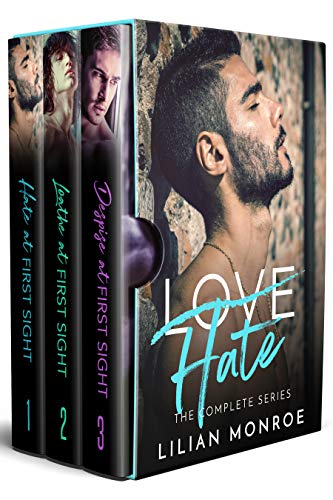 You claim I stole your parking space, but that’s because you’re a smug, full-of-yourself, patronizing bonehead.
You think you’re entitled to everything you see.
Newsflash: You’re not.
As such, you can stop staring at my a**.

Sincerely,
The girl whose day you just ruined.

That’s the letter I wish I slipped under that numbskull’s windshield wiper…
… Until I show up for my first day at my dream job, and find out Mr. Arrogant Jerk is my new boss.

The worst part?
Martin Henderson, a.k.a. Mr. Arrogant Jerk, is devastatingly handsome.
Sinful. Brooding.
Too attractive for his own good... or mine.
One thing is certain: I’m about to be in big, arrogant-jerk-induced trouble.

Getting fired sucks.
Getting propositioned by some arrogant, self-important billionaire three seconds after getting fired?
That really sucks.

No, thank you.
I have plans with a good friend called Chardonnay, and I expect those plans to keep me occupied all evening.

One thing I don’t expect?
For Liam Maguire, the billionaire, ex-olympian that I just rejected, to offer me a job.

Not just any job. My dream job.

The only downside is that I have to spend my days working with him.

Feeling his tantalizing gaze sweep over my body.
Wondering why my thighs squeeze together whenever he’s near.
Fantasizing about all the things that I rejected when we first met.

Well, all my fantasies are about to come true…
...and that could turn my dream job into a nightmare.
As it turns out, there's a lot more to Liam than meets the eye.

Adrian Maguire is a scumbag. Scourge of the earth. A dirty, corrupt, unscrupulous politician.
He’s the man who tried to ruin my sister’s life.

You know what I despise more than Adrian?
The fact that I have no choice but to take his case. Otherwise, I’ll lose my job.

I didn’t spend years in law school to defend people like him.

So, when he strolls into my office, I’m not prepared for his presence to suck the air out of my lungs.
When his touch sends sparks flying across my skin, not ready for my heart to skip a beat.
My traitorous body burns for him, even though my mind screams at me to stop.

I see another side of Adrian that he’s hidden away from everyone—even himself.

But when secrets are exposed, there’s more than just my career on the line.
Adrian could destroy everything...including my fragile heart.

Love/Hate is a sizzling-hot enemies to lovers collection. Swoonworthy, heart-wrenching, and an absolute must-read bundle.