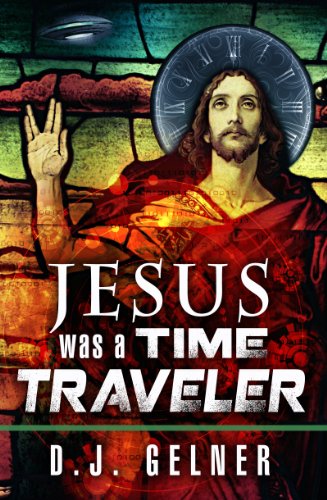 Of course, Phineas Templeton is no sober scientist in any sense of the word. A quirky English chap with a taste for fine scotch, Dr. Templeton builds a time machine at the behest of his mysterious Benefactor. His mission? To meet Jesus Christ Himself, and garner all of the fame, recognition, and accolades that writing an epic time travelogue would bring.

Unfortunately for Finny, Jesus is actually a fellow time traveler, a hippie named Trent from Colorado. While He explains that the past is fixed and immutable (“What happened, like, HAPPENED, man…"), Dr. Templeton realizes that he’s made a horrible oversight in his calculations, and can’t return to his own time period.

The only way home is to follow a list of very specific instructions his Benefactor has hidden on the time machine, which sends him on a madcap, at times hilarious voyage from watching his hero, Sir Isaac Newton, be berated by a high school physics teacher, to hunting dinosaurs, to rescuing two colorful American soldiers and fighting Nazis hellbent on his destruction.

All the while, Phineas is left to question his Benefactor’s true intentions. Just who is the shadowy person pulling the strings of a conspiracy thousands of years in the making? And why is Finny so key to their machinations?

A novel that’s been called “equal parts ‘The Da Vinci Code’ and ‘Back to the Future,’" "Jesus Was a Time Traveler" is a book that will please fans of Dan Brown and Douglas Adams alike with quirky humor, thought-provoking puzzles, cryptic clues, and a finicky universe that would like nothing more than to keep things as they are.

HERE'S WHAT REVIEWERS ARE SAYING (In addition to the great reviews on Amazon below!):

"A thoroughly enjoyable novel: equal parts 'Da Vinci Code' & 'Back to the Future' make it a novel you don't want to put down! I thoroughly enjoyed this philosophical--and funny--adventure through the centuries!" -Another Merchant Site

"I found the book engrossing. The trip through history and our future was fun to take with the Doc!!" -Another Merchant Site

"it made me want to keep turning the page to see what would happen next. It was engaging and I thought the plot was creative and interesting." -Goodreads