In the Charm (The Friessens Book 13) 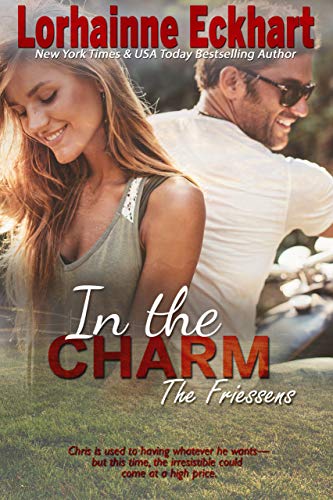 In the Charm (The Friessens Book 13)


Join a brand new generation of Friessens in New York Times and USA Today bestselling author Lorhainne Eckhart’s Friessen Family series. In the latest volume, Chris is used to having whatever he wants—but this time, the irresistible could come at a high price.

When stubbornly independent Chris Friessen decides to pack up and travel the country on the back of his Harley, he doesn’t expect that his decision to see the “real USA” will cost him in ways he can’t imagine. He soon finds himself face down on some backroad, cuffed by small-town cops. To make matters worse, he’s told to keep moving, but when he meets the incredibly sexy daughter of the sheriff, Chris can’t resist doing exactly the opposite—even after realizing that the sheriff’s deputy is head over heels in love with her.

JD is the daughter of a South Dakota small-town sheriff, teased by locals that if she were ever to consider marrying, she’d have a line of suitors around the block. But she’s not interested, as the only man she’s ever loved up and left, and her father was behind it. When she drives up on her father and his deputy toying with the extremely attractive redheaded Chris Friessen, she can’t resist tossing him an invitation to dinner, and she never expects that he’ll take her up on it.

Now, Chris may find that the irresistible JD comes with a lot more than he’s bargained for.

Didn't get a chance to read all the other books in the long running Friessen Family Series?

Start with the worldwide bestseller The Forgotten Child. This book alone sold over 500,000 copies worldwide and is now translated into French and German.

Stop by my website for the complete booklist here: http://www.lorhainneeckhart.com/what-is-the-reading-order-of-your-books/