Hits, Heathens, and Hippos: Stories from an Agent, Activist, and Adventurer 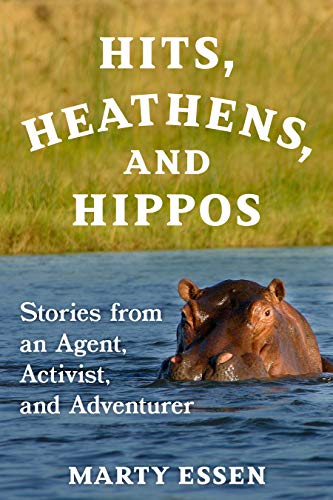 Hits, Heathens, and Hippos: Stories from an Agent, Activist, and Adventurer


★ “A thoroughly absorbing and inherently fascinating account of a most unusual life lived out in a series of equally unusual circumstances.”—Midwest Book Review ★

Hits, Heathens, and Hippos: Stories from an Agent, Activist, and Adventurer is a humorous and inspirational memoir that explores relationships and careers and how seemingly minor events can lead to life-changing results. Compelling stories have filled Marty’s life, and he tells those stories in a conversational style that combines his talents as an award-winning author with his talents as the creator of a one-man stage show that he has performed at hundreds of colleges across the United States.

This is a must-read for anyone faced with an unexpected career change, worried about finding and keeping the partner of their dreams, forced to take on bullies (whether individual, political, or corporate), eager for ideas to make life more satisfying, or just in search of a fun-filled adventure.

◆ Growing up with an over-the-top, born-again Christian father, who prayed aloud in restaurants, thought Satan possessed his Masonic lodge watch, and attempted to faith-heal his old Toyota.

◆ Becoming the youngest disc jockey in Minnesota history, where he survived an on-air attack from a jealous DJ and learned that rock ’n’ roll and country radio stations have vastly different groupies.

◆ Running multiple music talent agencies and becoming one of the top young talent managers in America.

◆ Telling the best lie ever to reel in and marry an amazing woman that the media would later dub as his “intrepid wife.”

◆ Moving to Montana, where he founded one of the state’s fastest growing independent telephone companies and an unusual baseball league with pro-prospects and out-of-control players.

◆ Surviving as an outspoken liberal in the most conservative region of Montana and dealing with the death threats and dirty tricks that came with it.

◆ Heartwarming and humorous stories from his relationships with musicians, governors, senators, and a very special Democratic nominee for President of the United States.

◆ Traveling to all seven continents in search of rare and interesting wildlife, backpacking with a tribe known for headhunting, and surviving a vicious hippo attack.

Be inspired, intrigued, and entertained!