Fly Me to the Moon: A Sylvia Stryker Space Case Mystery 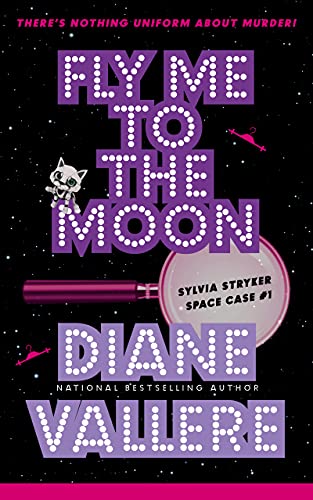 Fly Me to the Moon: A Sylvia Stryker Space Case Mystery


“Although I like to watch sci-fi, I'm not much into reading it, with a few exceptions. This book was one of those exceptions. It's as if Star Trek married a cozy...very well done! Read and enjoy!” – Sharyn, Goodreads

Sylvia Stryker wants a job on a cruise ship. A family scandal led to a white lie. Will a dead body in her ward change the trajectory of her life?

Sylvia Stryker used to help run her parents’ dry ice farm, until her dad's arrest nearly left them bankrupt. But after finagling a job on board an outer space cruise ship, she's ready to explore all that outer space has to offer. With a private room in the staff quarters, her robot cat by her side, and the responsibilities of uniform management, Sylvia is thrilled to return to work – until she discovers the second navigation officer dead in the inventory closet.

Neptune, the head of ship security, finds Sylvia's presence to be the most suspicious part of the incident; that's what happens when you hack your way into a last-minute job opportunity! But despite his efforts to pin the murder on Sylvia, she won't accept how the clues are unfolding. And if Sylvia doesn’t expose the murderer on the cruise, then she’ll never learn the truth about her family.

"This is where Diane Vallere shines -- giving you the unexpected and yet exactly what you didn't even know you wanted. A galaxy of stars to the author!” -- Barbara, Goodreads

I loved how Vallere combined science fiction, mystery, drama, and humor making this book very enjoyable and hard to put down. – Susan, Goodreads

“Although Sci-fi isn't generally my choice of reads, I gave it a try simply because the author was Diane Vallere….I'm so glad I did….Just as you would expect, this is a totally FUN murder mystery that doesn't disappoint!” – Judy, Goodreads

“I can't recommend this book enough to readers of any age or sex. It is a murder mystery. It is a spy story. It is a futuristic science fiction story. It is pure genius and entertaining from start to finish.” - Barbara, Goodreads