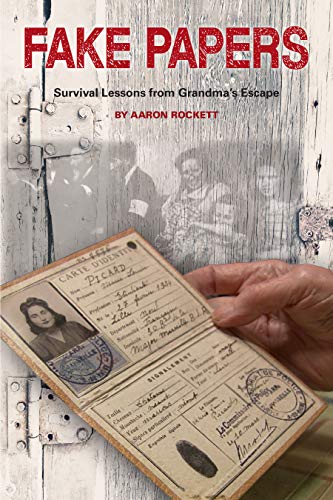 Fake Papers is a real-life escape story about a Holocaust survivor, who passes on survival lessons to her grandson, a documentary filmmaker working in war zones like Afghanistan.

Letty is waiting to die. She is 90 years old and eaten by regret. She once told her story of survival to her grandson to help him through a tragedy when he was a child. Now in his thirties, he rushes to learn the details of her story before it disappears, because in it are answers to questions that have haunted his life.

When World War II began, seventeen-year-old Letty from a rigid Orthodox Jewish family in Belgium is trapped in a resort nestled in the French Pyrenees with her mother and two sisters. Her oldest sister disowns the family to save herself as her mother’s distress turns into violent panic attacks. Ahead of Letty lay razzias, the French police round-ups of Jews, Nazi aircraft, young love, and uncertainty about who to trust or where to go in a country hell-bent on capturing her. Now her family’s fate, whether triumph or catastrophe, hinges on Letty’s escape plan.

At its core, Fake Papers is about a girl coming of age in a time of brutal intolerance and how it shapes her relationship with her grandson years later, addressing identity, and the tangled emotions and patterns of family relationships, repeated through generations, that make us who we are.