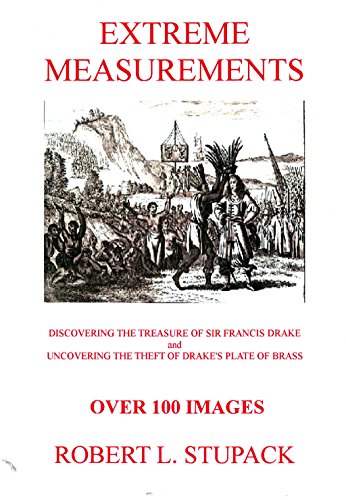 
It took the genius of Sir Francis Drake and an army of men to bury the contents of a Spanish Treasure Galleon. It was hidden somewhere in a land Drake named, Nova Albion and the only evidence of he left behind was a small metal plaque that claimed the land for England.

It only took one man to unravel the 400-year-old mystery surrounding the treasure's location and contents and he found it in his own backyard.

“Uncovering the Treasure of Sir Francis Drake and the Theft of His Plate of Brass,” follows the true adventure of Robert Stupack, who buys a house on Greenbrae Ridge in one of America's wealthiest areas, Marin County and is told by a neighbor that Sir Francis Drake’s famous “Plate of Brass” was discovered on his street.

While walking along an undeveloped hillside between his property San Francisco Bay, Stupack finds a weather-worn stone-carving of an Aztec warrior. When an antiquities dealer positively identifies the alabaster piece as dating to the early 1500s, Stupack instinctively knows that the fabled treasure is buried somewhere on his property. After reading about Drake's life, Stupack uses a copy of the Hondius Broadside Map of 1595 to align the images on the “treasure map” to key features in his yard. Carefully calculated test excavations with a shovel and a jackhammer transform Stupack’s once magnificently landscaped yard into a disaster area. When his ex-wife and family learn of his activities they are convinced that he has lost his mind and call the police, who drag Stupack out of his house and take him to a psych ward where he is placed into a straight-jacket and told that he is there on a 72 hour hold.

This incident did not dissuade him from continuing his quest!

His early excavations provide important clues to where the treasure is hidden. Stupack begins to dig a series of tunnels and is guided by Drake’s clever use of highly toxic colored clay that sicken him with acute boron and arsenic poisoning. Now, wearing layers of protective clothing, the tunnels zig-zag downward until his is 36 feet below the ground. Along the way he finds, a cache of Brazilian Diamonds, a “missing” Inca artifact, “The Emerald Goddess, a stone covered in gold and an incredible array of precious and semi-precious stones. He narrowly escapes potentially fatal booby-traps that employ quicksand, collapsing rooms and flooding tunnels designed to prevent anyone but Drake from recovering the treasure.

Two years into the project and exactly 423 years after the date of the inscription on the Plate of Brass, Stupack discovers the set of missing tools used to create Drake’s much maligned artifact. He meets with the Acting Director of the Bancroft Library to inform them that he’s found something that can change the “worthless fake” back into a “priceless artifact.” Stupack suspects that something is wrong when Bancroft no longer responds to calls or emails after metallurgical tests are conducted on the tools. Internet sleuthing reveals that in the 1970s, the controversy surrounding the authenticity of the Plate came about when the man who is now the Acting Director holds a press conference and misquotes the opinion of the examination’s lead scientist.

Twenty-five years later, the Acting Director has become a key player in the development of “monitoring software.” Stupack realizes that the software program designed to fight terrorism after 9/11 is being deployed against him and that all of his communications are being monitored. The tools are a “smoking gun” in a crime committed by a group of powerful men (including the Acting Director) who stole Drake’s Plate of Brass and replaced it with a replica because it was purported to contain a secret code that could reveal the location of the treasure. The Acting Director's goal is to prevent Stupack's discovery from reaching the public's attention. The other man who knew about this crime may have died from arsenic poisoning and there is no Statute of Limitatio