Death is a Woman Omnibus 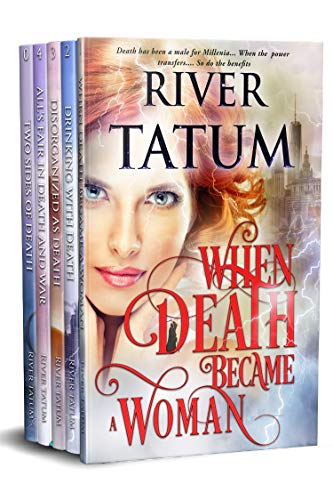 Death is a Woman Omnibus

Get the entire Death is a Woman series for one very low price, including the prequel!

When Death Becomes a Woman:

For some, it's a fictitious world. But for Debra Stone, it's everyday life.

After a chance encounter with a man she enjoys throws her down a path she almost can't believe, she struggles to cope with her newfound purpose.

Ushering souls into the afterlife. It can't be real, right? But the men who catch her in the act are real. And their adoration for her is very real.

For some, it's a fictitious world, but for Debra's friend, it will become her life.

For once, nothing is going right in her world, but she always has her friend to help her, right?

Ushering souls into the afterlife was something she scoffed at…until it became all too real.

For some, it's a fictitious world, but for Jessica Flores, it will become her life.

Jessica prizes one thing above all else: her salon.

Little does she know that her business competitor, Charity, has passed onto her something that will fight for that first-place spot in her life.

The foul-mouthed hairdresser is known in the community for her crass advice, her shark-like tactics in the boardroom, and her unforgiving nature.

All's Fair in Death and War:

For some, it’s a fictitious world, but for Debra’s friend and assistant, it will become his life.

Jonathan knew about the real world and death, he even thought it exciting. Until he became the next recipient.

Ushering souls into the afterlife was something he thought to be exciting… until he was drafted.

What happens when two sides of Death meet up for battle? Will either walk away unscathed?

Polly, an independent reporter with her own blog, was onto something big. If only she could find the man who’d been saving people’s lives all over New York City. Others had said he was a superhero, but she had dubbed him The Savior.

Grab a glass of wine and read this boxed set. Just be careful when taking a sip since the laughs can be dangerous!

Go up and click ‘Buy’ or ‘Read For Free’ now and start reading a series that turns love and relationships totally around.