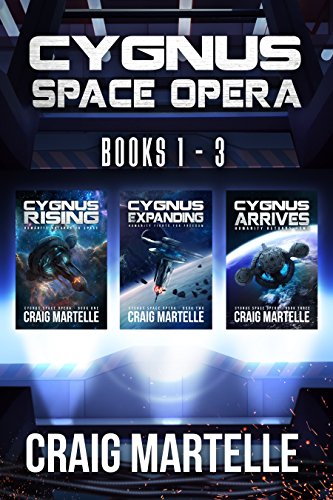 
Cygnus Rising, Cygnus Expanding, and Cygnus Arrives - the first three books in the Cygnus Space Opera series bundled together for a single read.

Snarky Hillcats and the Cygnus Marines on harrowing missions …what could go wrong?

What do others have to say about the Cygnus Space Opera?
•“Most authors can't make an animal character believable. This one does. Craig Martelle has a great imagination and can put it down on paper for you to enjoy also, just like the great writers of the golden age. His writing is very reminiscent of their work.” Amazon five-star reviewer
•“…you will see the flavor of Sci-fi, Fantasy, and with enough sarcasm and humor to keep you highly entertained!”
•“A character driven book, but with a stable plot as well.”
•“I enjoyed reading it very much. There is a lot of humor as well as action. I look forward to the next book in the series.”

From space they came to space they returned. Humanity would not be denied.

The crew trains for their mission and joins the Cygnus-12 as it tests the Interstellar Space Engine, venturing far beyond anywhere they've gone before. They didn't expect to find life, but they did, another human colony at the far reaches of space. The Cygnus-12 goes on a mission of peace, but war beckons and the space ship is the prize.