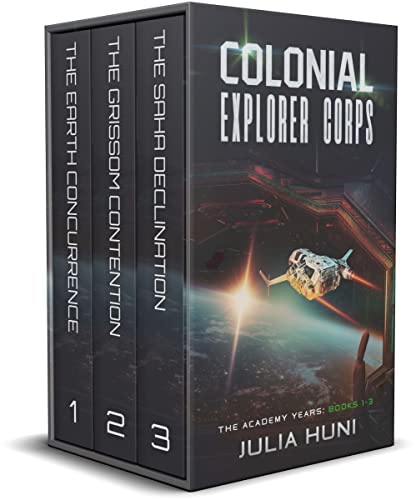 
A hero with big expectations. A daughter who doesn’t want to live in his shadow.

Siti Kassis joins her father, the “Hero of Darenti Four,” on his last assignment: to find and explore the deserted homeworld of mankind. It’s a twenty-year mission, and a chance to make history--even if twenty years in deep sleep is a bummer of a way to start her “gap year.” But what awaits them is beyond everyone's expectations.

When Siti reaches Earth with the CEC, nothing is as they expected. Dangerous conditions and unexpected enemies cause her father to overreact, keeping Siti on a tight leash. When tragedy strikes, Siti must take matters into her own hands. Can the hero’s daughter save the day?

Fresh from the mission to Earth, Siti enrolls in the Colonial Explorer Corps Academy--the same academy where her father was the captain of the grav-ball team, and still holds flight records for the extreme piloting competitions. As the daughter of a revered alum, she's expected to lead the legacy students to victory in every training scenario and game.

But Siti wants to prove her own worth. Shunned by the other legacies when she refuses to play by their unfair rules, she joins a band of misfits for her class's most arduous trial: Prime Survival Week.

Siti excelled at the Academy, earning honors and respect. She has one last cadet mission before she graduates, but it should be easy. She'll be the most junior member of an established Explorer Corps team landing on a partially explored planet. With decades of experience and the full support of the corps, what could go wrong?