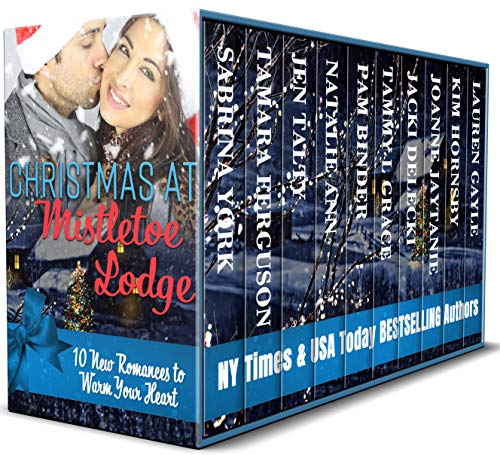 
NY Times, USA Today, & Award-Winning Romance Authors bring you the HEA Box Set of the Season!
10 NEW BOOKS to warm your heart and curl your toes!

Each novel in this sweet to steamy romance set has a Mistletoe Lodge, none the same, but all magical, Christmasy and full of Happily Ever After endings. Curl up in a favorite chair and treat yourself to 10 wonderful holiday romances full of Christmas trees, jingle bells and mistletoe.

Sabrina York - Cooped Up For Christmas -- It was supposed to be an easy gig--working as a concierge at a luxury lodge for the super rich over Christmas--but then he had to show up. The boy who broke my heart all those years ago. But former Navy SEAL Cameron Cooper isn't exactly a boy anymore.

Tamara Ferguson - A Kiss Under A Blue Christmas Moon -- Blue Moon's band leader, Noah's been crazy about Mia since the moment they met at a magical beach concert, but Mia's father sabotages their romance before Noah goes to war. Six years after escaping her controlling father, Mia's returned to Crystal Rock to find Lieutenant Noah Erikson's never stopped loving her.

Jen Talty - Alaskan Christmas - Flynn Wagner sets off to the frozen tundra and the Mistletoe Lodge, prepared for endless stories about her mother. However, nothing can prepare her for coming face to face with the one man she couldn't get out from under her skin. At the lodge, Colton Granger never expected to find the woman who had changed his life forever in high-heeled boots, a winter coat that wouldn't keep a person warm, and a killer smile that would soon melt his heart.
Natalie Ann - Christmas Love - Former model, Noelle Bennett has decided she wants to be behind the camera instead of in front of it. Just her and the woods around her little home, snapping pictures of the winter landscape and historic Inns. Then how did sexy veterinarian Dr. Chase Martin talk her into adopting a puppy and wondering if the peaceful life wasn't what she wanted all along?

Pam Binder - Christmas Makeover -- Mistaken as a wedding and events planner, the out-of-work dog walker, is hired to transform a rundown inn into a Medieval themed-wedding destination. But the owner's handsome son, Owen, has other plans for the Inn.

Tammy L. Grace - Christmas in Snow Valley -- Emily hasn't heard from the boy she thought was "the one" since hewalked out of her life. When he walks back into it, and she sees he's morehandsome than ever, her resolve evaporates. A beautiful lodge, a massivesnowstorm, and two lovable dogs might be the perfect catalyst for the two ofthem to confront the past and rekindle what they thought was lost.

Jacki Delecki - Mission: Impossible to Wed -- Five years after her broken engagement, Madisondreads nothing more than yet another wedding--especially one she was hired todesign for during the Christmas season. Gabe, the best man, would rather returnto the field as an elite spec ops soldier than think about marriage. AlongsideMadison's bridezilla friend, the country wedding only gets worse when she isforced to interact with Gabe. Will the close proximity change their minds aboutlove?
Joanne Jaytanie - Christmas Chemistry -- It's nothing but an old tavern. But to the Jamersons and Brocks, it's a treasured history, a precious legacy. Can Gina Jamerson and Owen Brock meet in the middle or will their families ruin any chance of compromise?

Kim Hornsby - The Christmas Challenge A hermit blogger attends a destination wedding as part of a Christmas challenge and meets someone who gets her heart racing again only to discover he has a game-changing secret--about her.

Lauren Gayle - A Southern Lights Christmas When a rare winter storm covers their Christmas getaway with bone-chilling snow and ice, two strangers are challenged with the reality of winter in a southern town.
Share