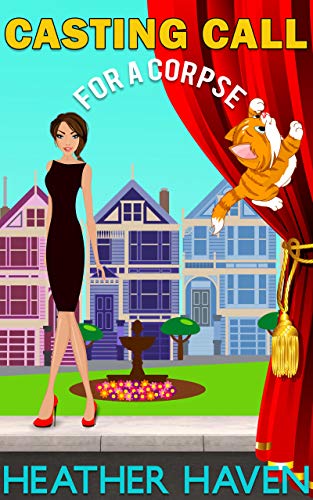 
A DETECTIVE AGENCY WITH HEART.
AND A WEDDING ANNIVERSARY!

Super sleuth, Lee Alvarez, finds a dead man wearing a tuxedo in a friend’s bathtub during a soiree for San Francisco’s VIPs. And not just any friend, but an internationally acclaimed actress who recently came to live in San Francisco. And not just any bathtub, but a bathtub residing inside one of Alamo Square’s famed Painted Ladies, recently bought by said actress.

The police believe it’s the actress friend who done the man in. After all, it’s her house and her tub. And another man died under suspicious circumstances around her recently. Both romantic encounters, doncha know. The actress must be guilty.

For ace detective Lee Alvarez, the timing couldn’t be worse. She is supposed to go off in celebration of her 6-month wedding anniversary with her hunky hubby. Paris is calling!

Her long-time friend, plus her mother – She Who Must Be Obeyed – thinks she should stick around and find out who the real killer is. So Lee, family, handsome hubby, and Tugger, the cat, are on the job. But Lee’s nose is itching. Which means not one of the suspects is telling the truth.

Or not all of it. Lee soon uncovers threatening letters, sullen playwrights, dead bodies, and a criminal web of jewel thieves, all treading the boards of her friend’s latest musical. This is showbiz?

Author Haven pulls out all the stops in a cozy fan’s delight about a charming, and unconventional Palo Alto detective family who get their man or woman, as the case may be. Book Seven follows its tradition of the Bay Area’s favorite PI, who rolls over with all four paw in the air when it comes to her darn near perfect mother. But with the help of her computer geek brother and handsome hubby, Lee works to solve the case in time to celebrate her own 6-month wedding anniversary.