Called to Battle: A Supernatural Thriller of Heart-Pounding Mystery & Suspense 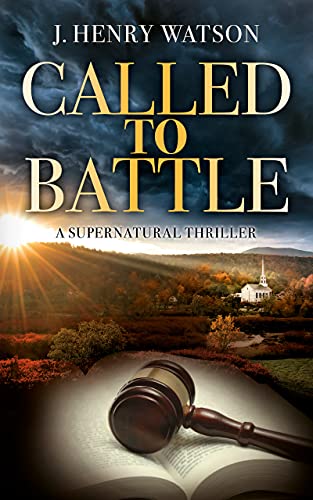 Called to Battle: A Supernatural Thriller of Heart-Pounding Mystery & Suspense


For fans of best selling mystery and suspense novels comes a supernatural thriller about a pastor, a lawyer and a police officer who are swept up into a battle between spiritual forces of good and evil.

When Jim Conwell answered the call to pastor a small community church, he never dreamed it would toss him into the fight of his life.

The unsuspecting town of Whittenville, nestled in the scenic mountains of New England, once had everything going for it. But now, the winds have changed; sin has become rampant and drug dealers rule.

Dark powers lurking in the shadows threaten to destroy anyone standing in the way of their plans. The evil hits its mark when the police discover Jim with a smoking gun in his hand and the body of a church member on the floor. Jim soon finds himself at the epicenter of a courtroom drama that is fought not only in the natural, but also in the spiritual realm.

The opposition is ruthless, but with Jim’s guidance and godly wisdom, a small team of ordinary people come together with only their faith and willingness to fight the good fight. Victory seems impossible, but with God’s power made accessible to them, they just might be able to reclaim the battlefield. But will it be enough to win the war?

This gripping murder mystery, inspired by real events in the author’s life, offers keen insight into spiritual warfare, the reality of evil, and the power of prayer. If you enjoy a great legal thriller or suspense novel from Christian fiction authors like Ted Dekker, Frank Peretti and Joel Rosenburg, don’t miss this heart-pounding novel from J. Henry Watson.

★ Scroll Up Now To Buy A Copy Today ★

In this compelling supernatural thriller, he weaves together his real life experiences and keen spiritual insights into a non-stop legal battle centered around a small New England congregation. From the opening pages, the reader is swept up into the mystery and suspense as a team of dedicated Christians work together to solve a puzzling case of attempted murder.

Buckle up for a “can’t put it down” roller-coaster ride featuring plot twists, surprising suspects and unlikely heroes. With each turn of the page, you’ll not only be entertained but inspired by the power of prayer and the value of friendship.

I’ve been privileged to know J. Henry and his wife Kristin for several years. I have witnessed their faith under fire, and their tremendous courage in the face of tragedy. When J. Henry writes about the challenges of the pastorate, local politics and the legal system, he draws from a deep well of both pain and purpose.

Anyone who enjoys reading Christian fiction books will love this “courtroom drama meets supernatural thriller.” I highly recommend to you both the message and the messenger.