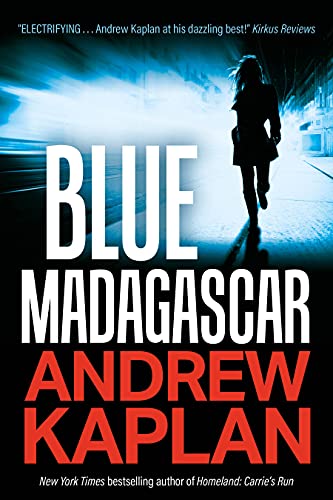 
"Kaplan takes the thriller genre at its word, moving as fast as Ludlum, but with ten times the eye for settings and crisp characterization." –Kirkus Reviews

She was a throwaway kid from the mean streets of Central Los Angeles. Now a Homeland Security Special Agent, the future of America may depend on what she does next.

A Presidential candidate commits suicide, and no one knows why. A mysterious man is killed during a jewel heist on the French Riviera. Intelligence agencies around the world are scrambling. U.S. Homeland Security sends the one woman who might be able to solve the secret of "Blue Madagascar" before it's too late. The trail leads her on a cat-and-mouse chase across Europe. But others are interested – and they will kill to get it.

Move over Jack Reacher, Mitch Rapp, and Jason Bourne and make room for Casey Ramirez, a heroine for our times. A woman whose story you won't be able to put down or forget. The glowing early reviews are in. Join the excitement!

"Flawlessly conceived . . . The characters are unforgettable. Kaplan is

up there with the best." –Readers Favorite