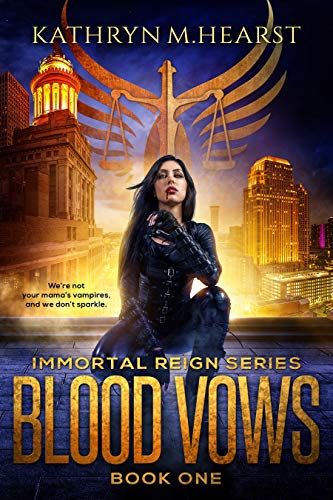 
We aren't your mama's vampires... and we don't sparkle.

Serena’s not your typical vamp. She drinks holy water for breakfast, and her boss runs the Vatican. However, life isn’t all rainbows and unicorns. Her relationship is in the crapper, and she’s asking herself the age-old question… “Should I stay or should I go?”

Change is hard, especially for an immortal.

For three centuries, two things have been constant – Nicholai and her job. Working as an assassin for one of the most influential forces in history has its perks, but business is slow. That all changes when Nicholai's human descendant is murdered, and he's the prime suspect.

As the body count rises, Serena and Nicholai are forced to work together to find the real killer before it's too late. The problem is…the more they discover, the more they’re convinced the murderer is their commander. Worse still, proving him guilty could lead to a rebellion.

On the bright side, there’s nothing like a war to put the spark back in a 300-year-old marriage.

You'll adore this urban fantasy series, because everyone loves a tale of redemption and second chances.

**Previously published as Feast of Reverence**