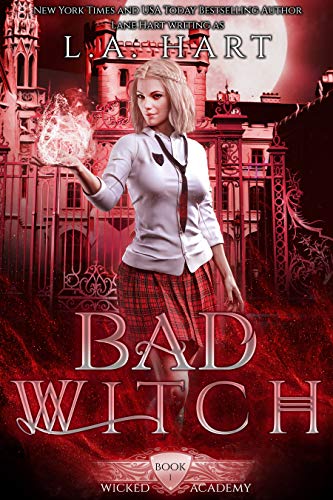 
Once upon a time, Harper Rhodes was just a normal, boring, college freshman.

Or so she thought.

That was all before she was kidnapped by a scheming vampire and thrown into the secret world of supernatural beings at the Wicked Academy.

The coven masters who run the academy insist that Harper is a witch, possibly the last one in the world, and that the fate of their kind is in her hands. It all sounds ridiculous to her, but either way, they refuse to let her leave.

While being wooed by warlocks and stalked by Drake, an unapologetic vampire, Harper begins to fall for Rowan, a gruff shapeshifter who is the only good thing about her new life, even though he’s completely off-limits.

When the masters eventually get tired of waiting on Harper to choose a warlock mate, they decide to take matters into their own hands.

Knowing that none of her admirers will be able to reach her in time, Harper will have to figure out how to finally embrace magic and wield her new powers to save herself.

And if there’s one thing she’s actually learned at the Wicked Academy, it’s that sometimes being bad can feel really good.

This is the first book in the Wicked Academy series and is intended for mature readers.