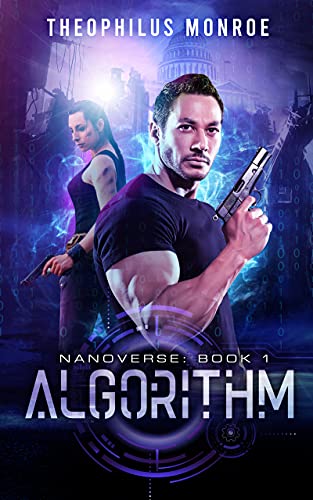 
Nanovax was supposed to be our salvation.

Until the terrorist attack. Fifteen cities in a single day.

Again, they said Nanovax was the answer.

The same technology meant to heal us could now be used, through an algorithm, to track us, to predict human behaviors...

It healed my wounds in the war. I became the face of Nanovax...

Then, the algorithm identified me as a threat... a terrorist...

Now, I'm on the run and fighting against the very technology that once saved my life... and if that wasn't frightening enough...

The government has my daughter.

Algorithmis the first book in Theophilus Monroe's Nanoverse, an action packed dystopian sci fi thriller series. As a former soldier, suffering from PTSD, Brian Goff is not only a threat to the new system, but his very injury has given him control over the nanobots. Like Neo, in The Matrix, Goff is an unlikely hero whose "technomagic" makes him the the last hope for human liberty, freedom, and justice.

Go up and click 'Read for Free' or 'Buy Now' to find out how Brian Goff and the resistance rise up to challenge the algorithm!