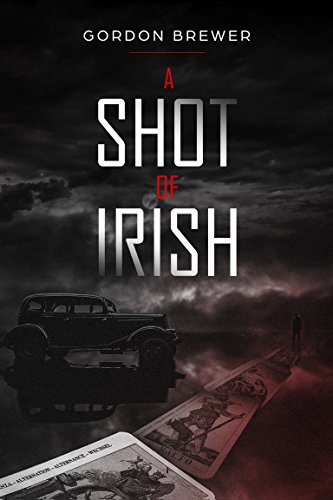 
A corrupt city ran by a political machine.
Racketeers and gangsters fight for control of the waterfront.
Mysterious, bloody murders occur throughout the city.
Black-robed figures are offering blood sacrifices to an unknown demon.

Ray Irish has found his home.

In the months following World War II, Ray Irish travels from town to town trying to drown the memories of pain and carnage with bottles of whiskey. He is a tramp, and his mode of transportation is the inside of railroad cattle cars. When Irish drifts into Oyster City, a struggling town nestled along the Chesapeake Bay, a chance encounter in a back alley gives him an unanticipated job and a couple of new suits. Working for the corrupt man he saves, Irish quickly discovers his new home has a polished veneer that barely conceals layers of deception and treachery.

Paired with a conniving woman photographer named Cat, Irish descends into a world of grifters, racketeers, and cops on the take. Something more ominous lies behind the tranquil image that is projected by the town elders. The grisly murders of a chauffeur and a policeman are only part of a web of odd occurrences involving strange people wearing the masks of tarot card characters. While Irish battles with thugs who have him in their sights, the ex-Seabee follows a chain of unusual events which might lead to a murderer or his death.

He will need the luck of the Irish to survive in a city that hates outsiders.