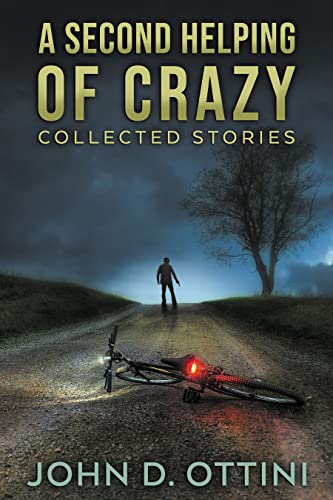 
A Second Helping of Crazy

In A Second Helping of Crazy, author John D. Ottini has collected thirteen of his most memorable stories in one volume. Three stories were previously chosen as Finalists in the annual Royal Palm Literary Awards competition, and the rest are a selection of the author's personal favorites.


Tormented Heart: A husband discovers that fulfilling his departed wife’s final request is more than he ever bargained for. Life among the Fireflies: The simple and seemly idyllic farm life of elderly grandparents masks a dark and deadly secret. True Confession: A code of ethics which condones murder. Blame it on the Weather: A father’s revenge is bestowed upon an unlikely suspect. Killer Karma: What goes around will more than likely come around. Elevated Madness: A casual meeting in the elevator of a downtown office building turns into madness. One Shot to the Head: A romantic dinner on Valentine's Day becomes an evening that ends in humiliation. No Return Address: A retired postal worker’s past indiscretions come back to haunt him. Things We Can’t Control: Sometimes losing a bet, means losing a friend. Words to a Kill: When a wife’s post-accident behavior troubles her husband, his brother makes an unorthodox suggestion to help cure her problem. Hell to Pay: A couple of unruly youths discover that’s it’s never a good idea to pick on an elderly woman with nothing to lose. Remorse: A husband learns the hard way that murder is not something to be taken lightly. The Butcher: A butcher with an appetite for women and a fetish for collecting unusual objects.