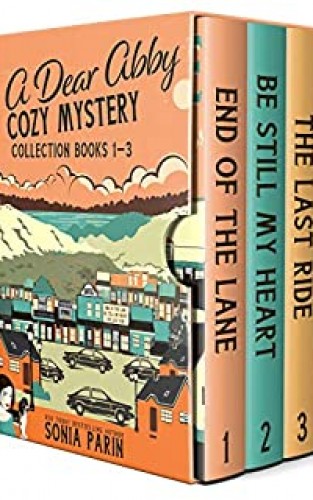 
Curl up with these small town cozy mysteries filled with humor, fun and the quirkiest characters around!

End of the Lane (Book 1)
Abby Maguire’s first day in a new town and new job could be her last. Instead of writing about the weekend bake sale, she has to give a statement to the police. It seems the small town of Eden is not the idyllic place she'd imagined it to be. There's a killer on the lose but the finger of suspicion is pointed at Abby.

Be Still My Heart (Book 2)
Abby Maguire is in a rut and in desperate need of a scoop, not another dead body, but that’s what she gets.

After witnessing an altercation between two Eden Thespian rivals, Abby Maguire, the town’s new reporter, hopes the annual Eden picnic fundraiser will be the perfect venue for her to witness some fireworks. Everyone has turned up, and everyone is dressed in 1920s costumes, including the dead body she finds.

The Last Ride (Book 3)
A carousel. A body. An inheritance.
Eden’s local café owner, Joyce Breeland, has issued Abby Maguire an ultimatum - the small-town newspaper reporter must find the identity of the Eden Bloggess or be banned from Joyce’s café. Functioning on limited coffee rations, Abby Maguire goes in search of this elusive blogger only to stumble upon a body and a mysterious inheritance. There’s a killer on the loose and he might be working his way through a list…

I LOVE this book. The writing flowed, the story drew me in immediately and the characters were incredibly likable. Abby flies halfway around the world to start a new life as a small-town newspaper reporter in Australia. Her first assignment is supposed to be about cake, of all things, but instead she finds herself investigating the murder of her new boss. This is sincerely the perfect cozy mystery. It is fast-paced, lighthearted, fun and engaging. I will be keeping my eye out for more books by Sonia Parin. (End of the Lane) Amazon Reviewer

A hilarious cozy!!! I love Doyle!
A small town, a reporter and a dog. Throw in murder and stir with a lot of sugar
Well written with a good story line (Be Still My Heart) Amazon Reviewer

I love this writer and especially this series in Australia. The characters are real and funny. They relate to each other. There is consistency between the books. (The Last Ride) Amazon Reviewer