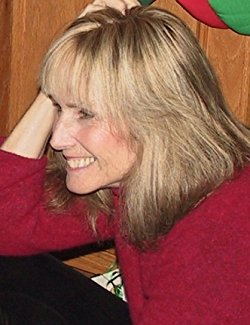 When did you start writing as an author in earnest?

I have always been a writer, from the time I was a child. I wrote for magazines in my adult years but turned to being a published author in 2007.

What interesting or funny quirks do you have while you’re writing your stories?

I keep my dogs with me while I’m writing. After I wrote a memoir (Riding Through It) in 2007, I began writing fiction… novels told through the eyes of dogs. So, I keep them handy just to observe them.

You have a series called Snow Blood.  Give us the run down on what that series is about.

Snow Blood is a series based on the original, the first vampire as told through the eyes of his kindred dog, a white Siberian Husky. I have formulated them into Seasons, and each chapter is an episode. The books (there are three with a fourth coming out at the end of this year) are written as paranormal mystery thrillers. Each “season” pits Brogio, his mate Selene, his first blood son, Kane, Snow Blood and his kindred wolf pack against impending evil. Season 1 reveals a sinister plot by the gods against the father of all vampires. As Brogio and Snow Blood unravel the conspiracy together, the love of Brogio’s life may be returned to him to set him free from the lonely existence that has plagued him for thousands of years. The story is filled with mythology, shifters, and monsters.

Season 2 is filled with twists, turns and suspense. When Kane sacrifices himself to save Snow Blood, his vampire family believes he is truly lost forever. After the devastating loss, a new ever-present threat of destruction threatens his kindred. While Snow Blood’s pack of kindred wolves stand guard watching for predators on the outskirts of Brogio’s winery estate, the vampire dog discovers that Selene, Brogio’s mate, is keeping secrets from her husband. This deception and Selene’s rapidly growing strength and independence threaten to create a rift between the father of all vampires and his mate. Snow Blood again helps hold their love together as he tries to protect them from the approaching evil. At the same time, the dog suspects that Nova, the beautiful female wolf that attracts him in the forest, is part of a sinister plot to destroy his master … but he can’t resist her power over him. This one again is populated with mythology, shifters and monsters but adds vampire hunters to the mix.

In Season 3 an even more powerful and daunting evil looms that may separate Snow Blood from all he loves… forever. While fighting for the existence he has grown to love, he is challenged to prevent a plan to enslave his family and the entire vampire nation. Along with myth, shifters, monsters and hunters, this one adds witchcraft.

What is the Vampire Bible and how did you weave that into your series, Snow Blood?

The Vampire Bible is just as its name suggests. In all the vampire legends I had read in the past, none satisfactorily explained how vampires came into existence. At least, not for me. I went to the Vampire Bible to secure the real legend of how the first was originated. His name was Ambrogio, and he was an Italian adventurer. Season 1 of the series reveals how he was turned into a creature of the night, why he was forced to drink blood to exist and how others came into existence. I don’t want to tell you much because Season 1 explains it all. But, it does involve the mythological gods and explains their love/hate relationship with the original vampire.

If a vampire so wishes to make you his kindred, it matters not what species you are. Or, at least, those are my rules. Brogio, however, has tempered his inner monster, and he doesn’t allow his kindred to kill humans for blood or to “turn” them unless absolutely necessary.

What do we see evolve through your series, without giving away endings to ebooks?

Believe it or not, the underlying theme of the books is unconditional love. Snow Blood, a dog, gives his love without question, always putting others before himself. Who would think that a family of vampires could be so devoted to each other? From the first book on, readers will see that love grow among all the characters in the book, each always willing to die for the others. Readers will discover unsuspected secrets and abilities of each character, and, even though they are creatures of the night, they will cry, laugh and be happy for their victories. Many readers who picked up the books thought that stories being narrated by a dog was an odd concept and that they don’t necessarily like paranormal stories about vampires or that it generally wouldn’t be their cup of tea. I have had those same readers tell me that they are hooked!

Why should readers pick your vampire ebooks over others?

They shouldn’t have to pick just my books. They should enjoy them all. But, as one reviewer said, “This is a must for all dog and vampire lovers!” These are little books with great heart. If you want a fast read that makes you laugh, cry and be in suspense the entire time, then pick me.

What kind of world have you created in the Snow Blood series?  Does it take place on our planet?  If so, is there a particular place?

The series starts in Oregon but moves around to Brogio’s various wine estates. He’s fabulously wealthy and has multiple wineries. The last several books have settled in on Wolfville, Nova Scotia. The action always takes place in a vineyard surrounded by forest, lakes and mountains… near a small town.

The Snow Blood series is also a bit of a romance story, right?  How does that take form?

Absolutely! But that’s all part of the legend… so I don’t want to say too much. When Brogio was human, he fell in love with Selene, a virgin in the Temple of Apollo. Unfortunately, Apollo had designs on Selene. To make a very long story short, Artemis, Apollo’s sister, tricks Brogio and takes Selene away from him. Season 1 details her potential return to him. But, it’s more than that. It’s a love story between Brogio and Snow Blood and between a dog and his human/vampire and wolf/kindred families.

Brogio is the original vampire. All other vampires were created with his blood. If he were to die, they would all die. No vampire can survive the true death of his maker.

Is the Snow Blood series done, or can you tease readers with something else that you are working on?

Oh, my, no! Season 4 will be coming out in December of this year. Season 3 introduced a new character named Seth, a white witch. Season 4 will reveal a secret about Seth and also introduce Mathias, a winged horse and guardian to Seth. It’s filled with witchcraft, vampire hunters and probably more humor than in any of the other three. I’ve already started thinking about Season 5.

Many of your ebooks have canine characters.  You also give away a portion of the proceeds from all of your ebook sales to dog rescue services.  Where did your drive to help dogs arise from?

Well, I am pretty sure I was a wolf in another life. Probably a dog as well. Many of my readers wonder how I can get into a dog’s head as I do. That’s probably why! Since I was a small child, I have loved and adored dogs and horses. I have had many dogs and horses that have had great, wonderful lives with me. It breaks my heart to see ones who aren’t having a good life, and I try and fix that. My husband Mark is a pilot, and we work with a group called Wings of Rescue. Pilots volunteer their time and money to fly endangered dogs and cats from kill shelters in California or from rescue groups to other states that have a need for dogs. So far, Wings of Rescue has saved more than 16,000 animals this year alone. Mark and I also foster animals for and contribute to LA Animal Rescue.

Besides being an author, you have also been involved on the marketing and publishing side of books for decades.  How has that helped you be a better author?

I don’t know if that has helped me be a better author. It has certainly helped me promote my books. As a writer, I honestly write what interests me and hope that it captures the attention of others. Good marketing suggests that I go out and figure what people want to read and let that dictate my writing. Unfortunately, I can’t write what I don’t love, so I’ll just keep writing what I love and enjoy the relationship with readers who like what I offer them.

Many of your clients have given you praise for being so determined and detail-orientated when it came to editing their writing.  How do you think that gives you a leg up in a world where there aren’t many barriers to someone creating an ebook and publishing it?

Any book marketer will tell you that one of the top worst mistakes you can make as an author is not having a good editor. Putting out books filled with incorrect grammar, punctuation, spelling, etc. is a killer. Readers don’t want that. But, a good editor can help you realize the real potential of your book and assist you in reaching it. My editor always makes my books so much better. People may be able to crank out a hot mess and toss it up on Amazon or other distributors, but unless it can really capture readers’ imaginations, it won’t go anywhere.

Just in case someone might be able to take advantage of your services outside of your own writing, what have you helped people with over the last several decades?

I’ve worked with numerous authors as an editor. I’ve served as a ghostwriter at times. Often, I work with them to develop the book further than the original manuscript. I have a knack for getting at the heart of the inciting incident in a book so that the reader is thrown into the action on the first page. I try to point out both the strong and weak areas of each manuscript. I often give my authors advice about publishing and marketing their books, and I try to keep up with all the latest info. To learn more about what I can do, anyone interested may visit http://www.carolmckibben.com.

Marketing Insights One Year Plus Into Operation